Oro Negro: The low down on our newest bottles

Oro Negro started as a Brewpub treatment that caught the attention and the hearts of thirsty Jackie O’s fans. Created by head brewmaster Brad Clark and Clark Benson, who just left our team to move to the west coast, Oro is the latest beer bottled at our production facility and currently on sale at the Taproom ($7.99/bottle, limit of 6 per person, per day). It’s also on draft at the Taproom and the Brewpub. 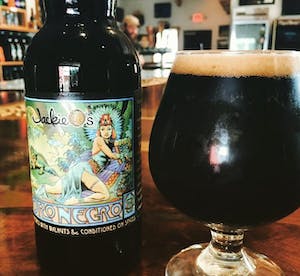 When fans kept asking for more Oro Negro, we applied the recipe to Oil of Aphrodite on the big system at the brewery, then let the spices (cinnamon, vanilla, cacao nibs, oak staves and habaneros) do some serious work in the stainless tank for three months until the brew was ready for packaging in July 2015. The artwork for the Oro Negro label was done in watercolor by Athens’ own self-taught illustrator and comic book artist, Sandy Plunkett. 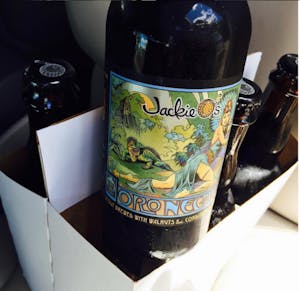 Since Wednesday, July 29, Jackie O’s has sold over 1,200 bottles of Oro Negro at the Tarpoom. Our distributor, Cavalier, will distribute bottles throughout Ohio this week. To find the location nearest you, check us out on BeerFinder.