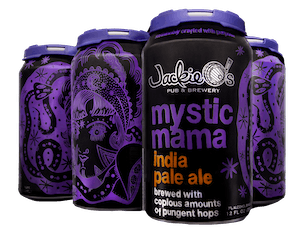 Mystic Mama has evolved many times over the past ten years.  It’s constantly improving and adjusting to the ever-changing IPA category. Just like many times in the past, Mystic has recently shifted slightly in our never-ending quest to craft a better beer.  Here is a brief look at Mystic’s evolution over the last decade.

The first incarnation of an IPA at Jackie O’s was Magic Mama IPA in 2007.  Heavily inspired by Dogfish Head, I boiled this beer for 120 minutes adding a pound of hops every 10 minutes.  This beer also had a portion of roasted barley and represented more of an India brown than pale.  It must have been my infatuation with DFH in those early years.  This beer was 7% abv, very hop forward, and quite bitter.  Magic Mama’s life was brief due to a worldwide hop shortage that hit in 2008.  The hop shortage quite literally wiped us out of any citrus/pine/fruity hops to make IPA, pale, or DIPA.

In mid-2009, the hop shortage lifted, and it was time to get back into the game.  Inspired by west coast IPAs such as Bear Republic’s Racer 5, Green Flash’s West Coast IPA, and Alpine’s Duet, I built a new IPA centered around Simcoe and Amarillo hops.  Magic Mama was dead, and Mystic Mama was born.

In early 2012, we had acquired the space for our production brewery.  With our minds focused on making Mystic Mama our flagship, we got to work.    He and I began working on the water profile, editing the malt bill and the hops.  Hopping additions were pushed further to the end of the boil after imbibing great hop bursting successes from Stone, Firestone Walker, and Alesmith.  Mystic was finding its groove in what, at the time, was an extensive period of IPA exploration.

Over the past four years, we have been brewing and canning large batches of Mystic every week.  We continually tweak the recipe and processes, attempt to reduce O2 pickup, increase shelf stability, and deliver a clear and clean product.  Through specific varietals of hops being unobtainable or being shorted on our hop contracts, the overall character of Mystic has shifted slightly at times – not by design but rather a necessity.  This time last year we could not make enough Mystic and did not have our larger fermenters online yet.  Tank space and turnover were at a premium.  Mystic was a little rushed into the market, a mere 14 days from the kettle to can.  The beer was green, slightly out of balance, but far from a mess and still a beer we took great pride in producing.  We knew that with the added fermentation capacity from our expansion, we could give Mystic, and our other hoppy beers, the respect, and care they deserved.  This past year we have made great strides in the formulation and processing of our hoppy beers.  Most importantly with Mystic.

The Mystic Mama you drink today, cans dated 03/29/17 and beyond, is something we are very excited and proud to produce.  Mystic now spends 22 days in the fermentation/conditioning phase to make sure it is ready for market when we release it.  We remove most of the yeast prior to dry hopping, which allows for a much more focused flavor and aroma period that follows.  We now dry hop with nearly double the amount of hops.

Before March 2017 our dry hopping rate was 1.3 pounds/bbl (31 gallons) of beer.  The new rate is 2.2 pounds/bbl.  This massive dry hop is roused in the tank for 5-7 days.  A full four days of conditioning allows all hop/yeast sediment to drop out of solution.  The flavors and aromas find their spot within the beer, and it is then that we package the beer into kegs and cans, resulting in a more stable and mature product that has a rich resinous character and holds its own longer in the can.  The 3% of caramel 10 malt was removed to inhibit the sweeter/maltier flavors and aromas to emerge with age.  We encourage you to find the new Mystic and let us know what you think; your feedback is priceless to us as a brewery and as a company.

In today’s insane IPA world, it is hard to know what is right, what is wrong, or what will stick.  Multiple dry hopping additions, turbid beer, minimal carbonation, no bittering hops, and/or all whirlpool blasts; anything and everything is happening in brewhouses all over the world.  Jackie O’s is dedicated to making a clean IPA with a focused and prudent process.  It’s going to be aromatic, hoppy, bitter, dry, and delicious.  No tricks or catch phrases, just an honest IPA that we pour a lot of respect and care into.  I hope you enjoy the newest incarnation of our beloved Mystic Mama IPA.

Have more questions? Shoot us an email over to press@jackieos.com